It’s almost an year from the start of a project with my two “pards” Marco Minerva and Riccardo Cappello, we named it: See4Me.

It’s an open source Community driven project that use the power of Azure Cognitive Services inside a mobile App or a wearable device helping vision impaired people to “see” what’s around him.

We already create the three version of the App using UWP and Xamarin, also published on WIndows Store and Apple Store.

On the UWP side, we’ve the bonus that the same exact application that run on PC or Mobile, can run smoothly also on Windows10 IoT Core devices with no changes.

With this in mind we start to design a prototype for a wearable device that can be used without restrictions from every blind person.

The first device we build is a little “rudimentary”, but it just works, and essentially its curious form factor create a general hype around it. 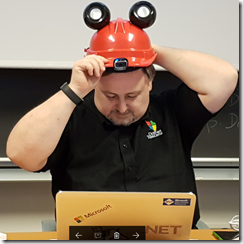 But obviously that type of device can’t be used for our final scope. For that reason I started designing a small board that can be included inside a small box, or in glasses.

I’ve designed keeping in mind to continue to use our original UWP application, and, for that reason we need a board that can support WIndows10 IoT Core. I’ve choose to use an Intel Joule SOM module as “brain” of my solution reducing the need of further connection or interfaces on the carrier board.

During the design period, I found that Gumstix promoted a worldwide contest about the design of new boards based on the Joule platform.

I immediately decide to participate with my design, and, with my big surprise I WIN! 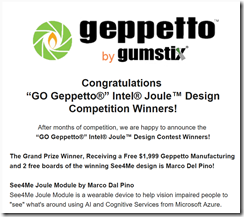 For me is a big personal success, also because I’m not a so strong PCB designer.

Now our next step are about to start to show the new device, and start thinking seriously to build it “for real”!