Windows Embedded Handheld 8 SDK is finally available, and you can download and install it from here .

But I want to make order out of what actually is this SDK and what role plays in the market.

Windows Embedded Handheld 8 is part of the Embedded family of products offered by Microsoft, in particular, the handheld version is already available from many years and in fact is the product formerly known as Windows Mobile smartphones that Microsoft was offering at that time. Still distributed on devices from all the main companies in the industrial sector (Symbol-Motorola, Honeywell, Intermec, Datalogic and so on).

This change of direction pointing towards the alignment and unification of the platforms also in the embedded world.

The new OS should see the light in the next year (the latest official news refer the first half of 2014), and is

close to the expected timing of the vNext release of Windows Phone (commonly known as Windows Blue).

But what will be the by main feature?

How to install the SDK?

downloading the installation package (about 460 MB).

The installation ends quickly if there is already a development environment for Windows Phone 8 (either on VS2012 or VS2013).

The first visible trace of the SDK presence is when we create or open a project Windows Phone 8 and note the in list of available emulators some new entry. All highlighted by the name "WE8H Emulator" and followed by the appropriate screen size emulated. 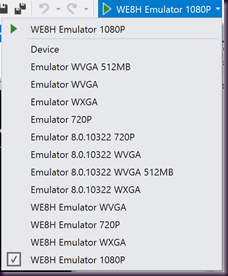 My attention was especially on a new measure corresponding to the new 1080p resolution, available from the GDR3 update of Windows Phone (for full HD devices such as the Nokia Lumia 1520) on this argument take a look at this interesting post on how to manage multiple resolutions in the new devices.

An initial test carried out with a small sample application, however, reveal that by using this emulator you can’t test the Full HD resolution device, in fact, the scale factor returned from its API is 150, while the resolution camera shutter 7152 × 5364 is exactly the values that are also returned by the 720p emulator. Here is the snippet I used.

Later on I’ll investigate on this argument.

The SDK documentation ( available at this link ) cover the two namespaces Windows.Device.PointOfService and Microsoft.Embedded.Devices.Enumeration added by the SDK and an example to emulate the barcode reader within the emulator.

In practice, it is now possible to use on WP8 the Point of Service API already available in Windows 8.1, obviously considering developing for the device WE8H.